I’ve previously attended a presentation led by artists Ruth Jarman and Joe Gerhardt in their pursuit to unite science and art. And I was certainly keen to hear the duo artists speak again as we walked around their current exhibition at the City Art Gallery in Wellington. They are called Semi-Conductor – their work showcasing Planet Earth and beyond thanks to their scientific endeavours and artistic visions Through a scientific lens the artists have created interactive art installations to recreate macro and micro worlds. It’s also about creating a new experience for visitors.

The exhibition is a celebration of scientific data collected from various institutions, including CERN and NASA. Both artists speak highly of their time at CERN, they relate their studies of quantum physics to a love poem. As artists, they question what informs the narrative and how to humanise the computer. They have created graphical images and framed new images into large-scale installations, so that they are almost architectural in scale. Film engages sound, photographs and videos; it’s a powerful aesthetic medium to visualise science and to combine time and motion. In fact, it was the live images of sound from various inputs such as earthquakes, volcanoes and glaciers that lead to the name semi-conductor. Their future goals are to revisit ideas with ice and glaciers; a strong indication that water scenes may flow in the future.

I followed the artists, Ruth and Joe on the floor talk to learn more about their individual exhibits. Brilliant noise is an exhibit that uses single snapshots of film to explore the relationship between sound and images. Areas of image brightness from ground-based observations are translated into layers of audio (radio frequencies) to play with scientific data in different ways. Parting the Waves is an exhibit showcasing animated visual waveforms from quantum simulations. The imagery is colourful and beautiful, derived from graphical data (amplitudes, wavelengths and frequencies). 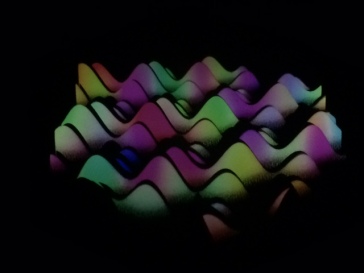 Black rain involved collecting data from twin satellites – a solar mission to look at the sun. Raw satellite imagery extends the viewer’s perception and knowledge through capturing solar wind and coronal mass ejections displayed as white noise.  Through the AEgIS is an exhibit based upon their time at CERN, illustrating how anti-matter responds to gravity. Particles ionise a photographic plate to show trajectories, which are later scanned with a microscope to create photographic images. The exhibit is presented as a large-scale animation. It’s a very small world portrayed on a large scale. 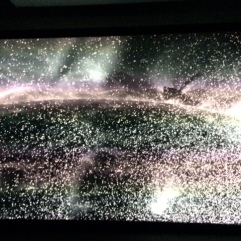 Earthworks is an animated landscape formation, showcasing earthquake, volcanic, glacial and manmade seismic activity. I appreciated the layers of colour as they are deformed to create new landscapes and to simulate tectonic and seismic forces. Data is translated into audio to reanimate the landscape through analogue modelling. 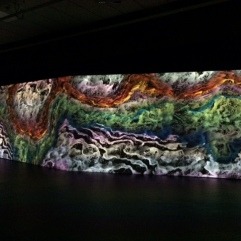 Worlds in the making is an exhibit I particularly liked. Perhaps it’s because I have visited the Galápagos Islands and some of the scenes resonated with me. Audio recordings were like a volcanic dialogue – seismic data had been collected beneath the volcanoes that sounded like rocks grinding. The artists made the point of sound creating romantic connections to a place. But I couldn’t help but admire what appeared and sounded like a primordial landscape. Perhaps, it is a vocal reminder of Earth’s early origins – the title being most appropriate.