It was to be a weekend full of aerospace events, otherwise in a wet and cold June in Christchurch. It’s not everyday you meet up with individuals inspired by spacecraft and satellites – and the chance to board the SOFIA aircraft.

Friday night’s aerospace meet up was to engage a number of enthusiastic space inspired members; reflected by people sporting astronaut costumes and NASA t-shirts. Naturally, I was keen to wear my NASA t-shirt, memories from my time at Johnson Space Center in Florida. A number of speakers were to share their ideas and experience, from policy advisors, to educational managers and business entrepreneurs. 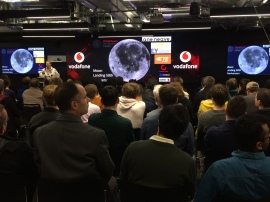 Tim Searle was to speak first as a senior policy advisor with New Zealand’s Space Agency. It’s a relatively new concept, which took flight in 2016 primarily instigated by Peter Beck’s Rocket Lab. I was to learn a few things about the government’s role, from the regulation of launches to the introduction of the Outer Space and High Altitude Activities Act in 2017. Developing space strategies and sustainability has helped over 100 space related companies in New Zealand reach their goal. The list was impressive, from navigation and Earth observations to disaster response and connectivity.

Miranda Satterthwaite set the stage for STEM education. As an education manager at the International Antarctic Centre she saw herself and others as ambassadors for international Antarctic Awareness. Her goals are many; to inspire students, partner with fixed wing aircraft companies and to increase teacher capacity in aerospace. I especially liked the notion of linking Antarctica to Space. After all, dry valleys and the hostile environment of Antarctica mirrors planetary environments. 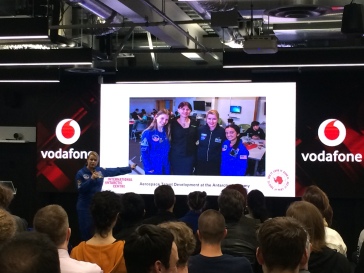 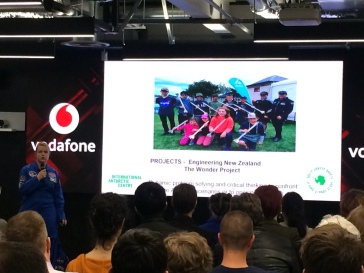 Mark Rocket spoke next about his long awaited space flight with Virgin Galactic Experience. As Director of Kea Aerospace and Chair of Christchurch Aerospace Centre, the sky was certainly no longer the limit. Although Mark had signed up in 2006, the journey to make space flight a reality has not been without setbacks. He spoke about the accidents, which have consequently cost four lives and three injuries. It’s hard to imagine flying in a spacecraft at an altitude of 90km with a 3G forced landing, but it will soon be their story for six passengers and two pilots. I’m sure Mark Rocket hopes to be one of them.

Eric Dalhstrom was to speak about the future exploration and development on the Moon. The topic was fitting topic given the 50-year-celebration of the first landing on the Moon. As Co Founder of Space Base, Eric had plenty of insightful information to share. The Moon is gradually accumulating ice at the poles, as shaded craters on the Moon had not seen solar energy for over 3 billion years. The next goal is ambitious – humans will be back on the Moon within the next five years. Just how will we live on the moon, create a fuel depot and mine? 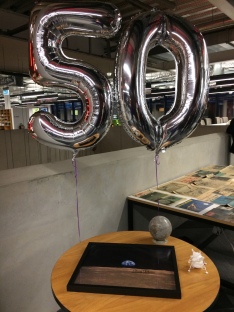 Glen Willloughby had some exciting stories to tell from his time at NASA’s JPL. As an Advisor in IT/Digital Innovation he supports Mars 2020, Europa Clipper and Planetary Defence Programmes. He acknowledged William Pickering’s reputation has served him well as a kiwi. The Jet Propulsion Laboratory is over 80 years old and NASA’s largest complex. In fact, JPL built Explorer 1 before NASA was even an agency. Explorer 1 was America’s first satellite – a direct response to the Soviet Union’s Spitnuk. Voyager 1 and 2 were launched in 1977 and provided us our first views of the gas giants. It’s incredible to now see the growth of satellites in Earth’s orbit.

And speaking of satellites and telescopes – a visit to SOFIA the following morning was also a special treat to view an airborne telescope. Shame about the 2-hour wait in the drizzle but at least I’d captured the opportunity to board such an amazing aircraft. It was one of 45 Boeing’s 747 special performance aircraft built, and now hosts a 2.7 metre diameter airborne telescope.

With a flight crew of three (captain, copilot, flight engineer) and four Pratt & Whitney turbofan engines to power up, the B747 soars to 12 kilometres (39,000 feet) above the terrain. Aside from guest scientists and ambassadors, the science flight planner ensures observations are on schedule and all systems are functioning properly. The Mission Director takes control of science operations during the flight. I could only but imagine the joys of taking flight and seeing this impressive telescope in action. But I hold hope – since 2011 more than 30 educations have flown onboard SOFIA.

And what about this flying telescope? SOFIA is a joint project between NASA and the German Aerospace Center. The Bent Cassegrain/Nasmyth Telescope was built in Germany – it can collect radiation with wavelengths between 0.3 and 1600 microns. It studies the wonders of the universe by capturing wavelengths to sub-millimetres. Due to the 12km altitude most of the obscuring effects in our atmosphere are avoided. A far-infrared HAWC+ camera (High resolution Airborne Wideband Camera) is attached to the telescope. It paints pictures of planets, comets, star formation, planetary nebulae and supernovae. In particular, scientists study how stars have formed and evolved in our Milky Way galaxy. It’s a matter of being star struck. 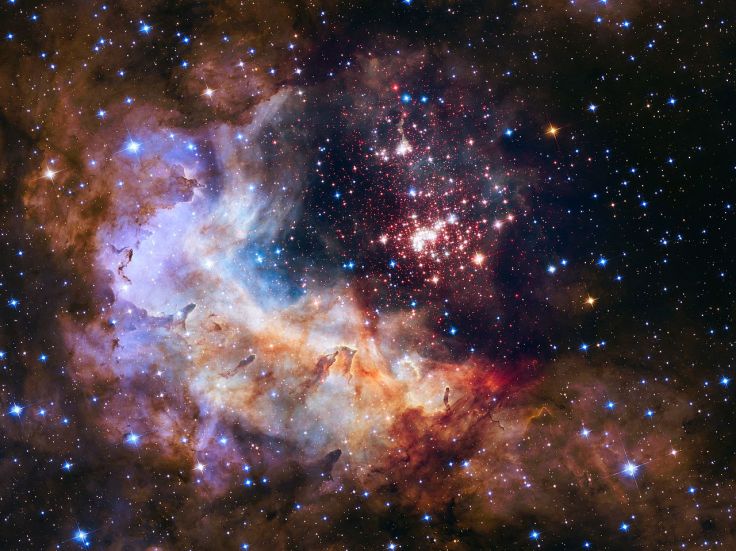