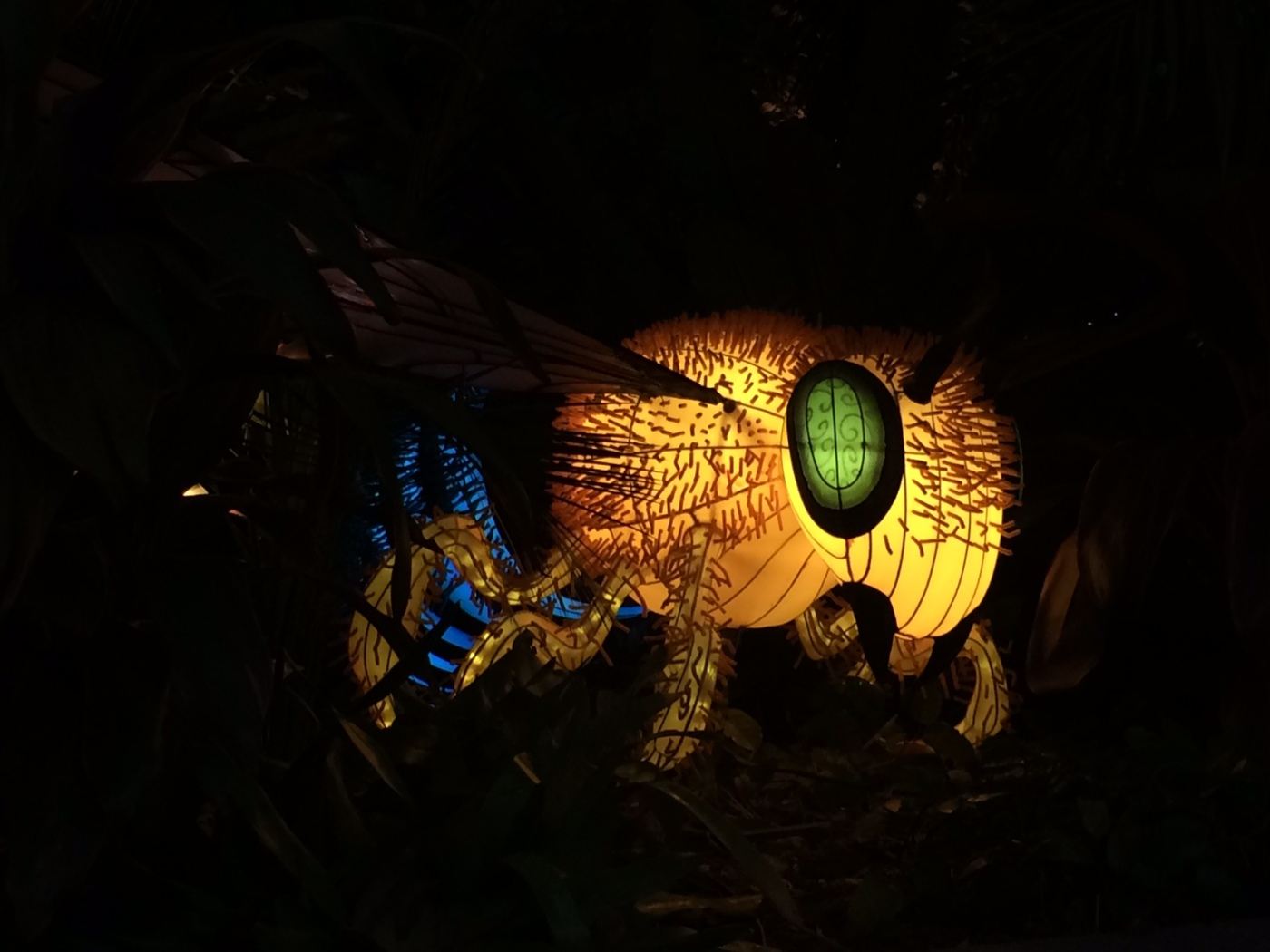 I’ve spent the last few weeks in Sydney, making the most of visiting exhibitions. I often seek out innovative approaches to presenting science and how artists aspire to establish their own signature style. The rise of digital multimedia is slanting a new light on the way we look at our natural world. Different artworks resonate with different viewers. From Hunters Hill Art Exhibition to Vivid’s magical light festival at Taronga Zoo – the natural world was decorated in an array of colours and styles.

I have always had a soft spot for drawing and painting wildlife, and the details of natural history illustration. At the Hunter’s Hill Art Exhibition, most of the paintings were composed in traditional media with a large proportion focused on flora and fauna. 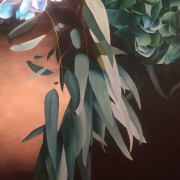 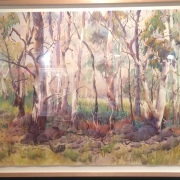 But traditional media is by no means less complex than digital media. There are many aspects to painting – the design and composition, light and shadow, hue and tone. And of course the different materials – the paints, pencils, pastels and papers. Many artists showcased their talents and their unique artistic styles captured my imagination. I also admired their techniques. Watercolour paintings allow a transparent look to radiate, a depth of colour uniting with the softness of the paint washes. Different pigments illuminating different colours, as the artist balances lighting and composition. But what does the artist do about a story or message? 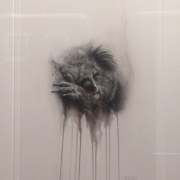 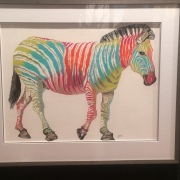 Conservation concerns are forever increasing and art is one way to express this message. But is painting nature’s beauty enough? Should public awareness be further heightened through a distinct visual message or narrative in a painting? Creatures show their personality as the artist captures the shine in their eyes.  I reflect on my own artwork – the need for detail in my animal portraits and their expressive eyes. And the visual stories of changing landscapes within the contours of an animal’s body. 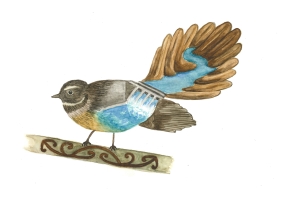 Illustrations can bridge gaps in science communication that a photograph may be challenged to represent. Scientific illustrations are portrayed in a range of media, including textbooks, children’s books, posters and scientific journals. As a scientific illustrator myself, I’ve always enjoyed the research process and learning about the subject. What is the anatomy of the species – its behaviour and habitat? Painting a wildlife story is like a jig saw puzzle – there are many features to piece together.

Taronga Zoo is shining an emerging light on conservation with over 100 artists, technicians, electrical engineers, lighting designers and animators getting involved behind the scenes. Children were also part of this design process. Taronga Zoo invited young people to design some of the illustrations that were to be bought to life as multimedia light sculptures of plants and animals. Soundscapes of young voices echoed throughout the zoological gardens, sharing their thoughts for the future of wildlife. It was an educational experience, a scientific discovery that showcased the beauty of nature and the importance of wildlife conservation. Endangered creatures from the ocean, bush and forest habitats illuminated their story of survival. 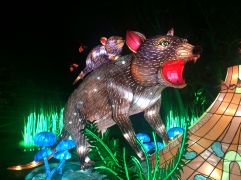 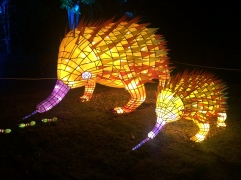 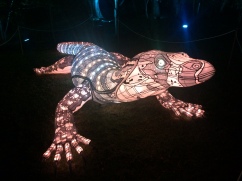 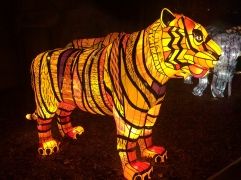 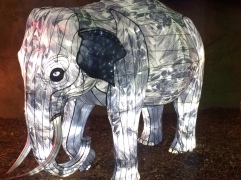 The focus was to highlight rehabilitation programmes Taronga Zoo has engaged in for the protection and survival of endangered species. Taronga continues to provide rehabilitation programmes for injured marine turtles, and to increase their survival rates in a forever-changing climate. After all, Australian waters are home to six out of seven of the world’s marine turtle species. Genetic libraries are also being mapped for some species. This is the case for the critically endangered pangolin. It is the most illegally traded mammal in the world. 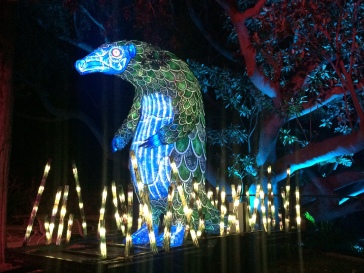 Taronga Zoo is expanding their research into new territories. The breeding sanctuary in Taronga Western Plains, is currently exploring the wildlife management of different species being reintroduced back into the wild. The bilbies once covered nearly 70% of the Australian Mainland. 200 years later their habitat is confined largely to desert regions. Further research, will manage the bilbies being reintroduced back into the wild. 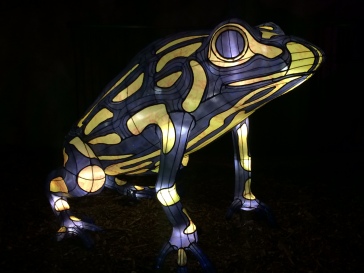 Taronga Zoo has made a commitment to increasing the wild population numbers of the critically endangered Regent Honeyeater and their release into the wild. Another critically endangered species, the Corroboree frog is being released into a remote pocket of Kosziuszko National Park in an attempt to bring the population back from the brink of extinction. Scientists are discovering experimental approaches to reduce the impact of the amphibian chytrid fungus on the Corroboree frog. 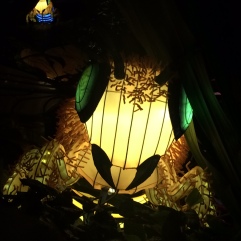 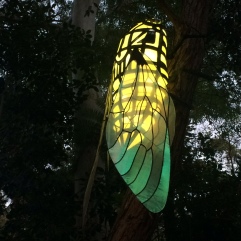 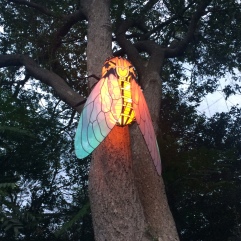 Lanterns captured the beauty of many endangered animals. I heard many little voices sing out to their parents with delight when they identified a particular animal. It’s a great way to engage all ages about the unique wildlife we still have on this planet Earth.